It’s been hammered into us that we need to use visuals in our presentations, to throw out the clip-art and replace it with stock photography but there are problems with stock photos, there are a lot of over-used cliched ones out there and using those images is as bad as using clip-art. One very clear example of this is:

Others in an effort to be “creative” will show other images of sleeping or “dead” audiences, all killed by a boring powerpoint presentation, i.e.: 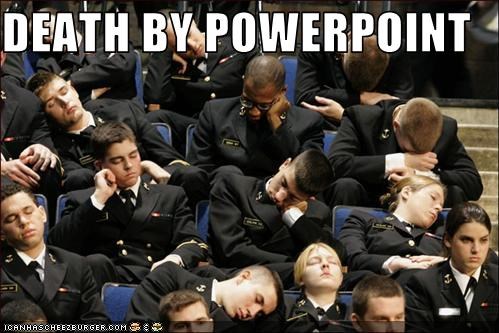 There are three problems with these sleeping images:

If you want to illustrate “Death by Powerpoint” then don’t just think of sleepy audiences, be more creative, be dramatic.

One suggestion is to not bother with finding the perfect image, instead use a dramatic font:

Or think about the drama in a phrase like “death by powerpoint”, the word death has a very strong resonance with us. To grab the attention of your audience and etch your message deep into their minds you could find an image that captures the strength of “death” yet is shocking and hard to forget. For example:

Cliches are a good way to connect an audience with a home-truth but they won’t get excited by them. If you want to grab your audience’s attention or make them remember your message then you have to avoid visual cliches “like the plague”.